A Long Road To Nowhere

I’m so tired. Exhausted in fact. This is all too much for me right now, my heads full.

Can I unplug from the world for a while? Please?
Simply sleep, be still, be quiet with no demands placed upon me other than simple existence?

I don’t even mind if I don’t come back again, the world that wants me doesn’t seem to belong to me anyhow, that was someone else’s life, someone else’s memories. Now I’m here just trying to deal with the mess of it all, I’m not qualified for that.
It’s hard to assume living within an identity you have simply been made aware of somehow, it’s inauthentic and unreal.

Of course I can’t feel connected to anything that has happened in this life, after all it didn’t happen to me, it happened to the others, I just watched from a safe distance.
I feel the term “being in the matrix” is over used but also the most suitable to describe this feeling, it implies magical thinking is at work, but for want of more appropriate descriptive terms, I am in that void where I am overtly aware of the true existence of this “matrix”. Nothing seems to be quite right or quite real.

A confusing space between the mind, thought and soul where what you believed to be true and what is happening to you don’t quite line up, leaving you questioning “is this actually a dream?” Who am I? Who are we? Why are the walls weaving in and out in rhythm to the speed of the now visible universal energy particles rushing around me? Is it the beginning of psychosis? I’m not manic… So why? Or am I just ‘aware’ now? 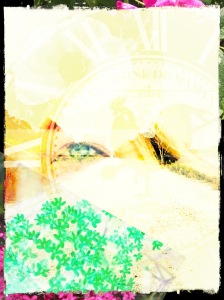 A field full of dairy cows appeared next door randomly only to vanish again the next day. There must have been 40, though it seemed odd to begin with, who would put dairy cows on that land, and that quantity? Did I imagine them?
Where were they now? The same land lays empty before my very eyes, except for a lone Jack Russell Terrier of epic proportions wandering through the olive grove. No worries. Wait, that doesn’t make sense… a dog could not be that size, surely it must have been one of the vanishing cows reappearing? I decide intellectually it was cow, but where were the others?

Drive past again 5minutes later, no cows, no giant dogs just the open paddock and a smattering of olive trees.
Even if the cows are hiding somewhere in plain sight, even if they exist I am left confused because I don’t trust my eyes, or my feelings and I’m unsure of the situations reality.

Socially acceptable explanations for various events are harder and harder to come by, how many coincidences can you legitimately have? Instead when left to overthink such matters, a subjective and previously assumed false reality seems to be more often the only plausible theories. It feels like someone is trying to confuse me on purpose. But why would they do that? A question I refuse to try and answer because those answers lead, well… nowhere good.

No, it doesn’t make sense. But what does? The fact that I can type this and then you see it on the other side of the world instantly complete with photographs I took on a telephone that I sent to my computer without a cable… that doesn’t really make sense either. Magic.

Then another part of me is so suspicious bordering on paranoid that it makes me start to doubt whether or not what I have been told is the basic fundamental of science is even true. Are you even seeing this? Do I just imagine that you are, are your responses real or a figment of my imagination? Have I been asleep my whole life and this is just a dream? If it is a dream, can I control the outcome? Is that why there are so many coincidences? Am I just manifesting them? The imagination can run wild with that theory, and if so then what is it that keeps us grounded? Is it the “but what if?” the ‘but what if I can’t fly?’ that stops us from taking the plunge? I see that can be applicable to the fabric of human existence – do people?’ Shouldn’t create our own moral code because we want to, not because of the what if’s?

What if we can fly? We have wifi… That is even more unbelievable than flying, birds fly – I mean we see them doing it every day… They are real, they were here like we were, we didn’t imagine them into existence… Don’t worry, I’m not planning on leaping off of a cliff I am just confused, overthinking…
If I don’t understand it but I see it, I am told not to question it and accept it, yet every fibre of my being questions every fibre of my being, always has and simply cannot stop. And when people then cast doubt onto your reality, well, it all just feels like we’re on a long road to nowhere.

← An Open Letter To My Abuser, I forgive you.
Big Baby in the Big Smoke →