I dropped off Miss 9 at a sleepover yesterday, because we live in the middle of nowhere the kids go to school in a more central small town about 40km away, the trouble is that is a central school and so all of their friends are spread around up to 50km in any direction, my kids always pick friends on the other side of the school. Anyway, I needed to stop in town and go to the chemist on the way home, but by the time I had finally dropped off madam and gotten back to town it was after midday and apparently small town chemists still shut shop Sunday afternoons. 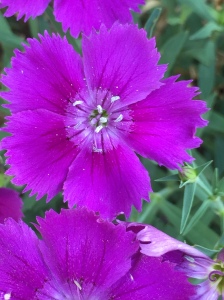 Anywho, an old man happened to be selling books at a little card table set up outside the closed shop, I took a glance as I walked by and noticed the word ‘Manic’ was on the front cover of the display book so of course it made me stop and look closer. The man introduced himself as Richard Murray and gave me a lowdown on his works.

His book is called “God’s Obedient Potter” and it’s his memoir about his relationship with God and how that has been influenced by his mania’s. Now, I’m not a religious person – spiritual in varying degrees when manic, but not religious. Despite that fact, I really wanted to buy the book, I suppose mostly because he’s a local author who shares my affliction and I wanted to support him. Also there is a white flag on the cover and for the last few weeks the ‘white flag’ analogy has been haunting me in coincidental ways normally reserved for moments of mania, so I felt as though it must have been meant to be in some way or another. 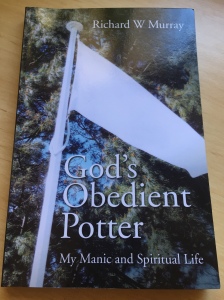 I didn’t have $25 on me at the time so I asked him if he would be there the following week, he smiled and picked up a copy of his life’s story from the stack on the table, took out a black sharpie and signed it for me with his worn hands, shaking violently from years of mood medication. He placed the book into my own hands and told me that if I enjoyed it I could pay him next time I see him around the place or if I couldn’t find him then I could give the money to charity instead.

We talked for a while, he was lovely and I accepted the book and read it this morning (it’s only fairly short.) We are very different people, very different lives and grew up in different era’s with different baseline beliefs and yet we are still kin who have when we boil it all down, experienced the same ‘enlightenments’ as gifts of our manic episodes as well as spent time in the same psychiatric facilities.

I love reading the memoirs of others with Bipolar or similar mental illness’s, some are amazing and unforgettable in the way that they speak to me, but of course authors have varying levels of writing talent. Some books are depressing, some incredibly uplifting, but all in all they are always fascinating because they are relatable stories. It is nice to be let in to another person’s world for a few hours and remember that we are not alone in our craziness.

We are all the same despite our differences and we have just used our own beliefs and existing knowledge of the world to give reason and meaning to our experiences in unique ways. I enjoyed reading Richards story and I hope I get a chance to chat to him some more and thank him for sharing his story when I find him again to pay him.

Speaking of books, here’s a link to my review that was published on The Good Men Project’s website over the weekend of Ryan Heffernan’s epic memoir “Clown & I.” If you haven’t already, check it out!

← Mystery Blogger Award
Bipolar Disorder, it is What it is. →

2 Comments on “Talking To Strangers – Richard”