I’m tired of all my emotional extremes, they’re slowly breaking me. Even when the bipolar is quiet my ability to turn mountains into molehills on a dime truly astounds me. I seem to subconsciously love to watch myself burn and then writhe around in agony.

Life can be so much more than a million shades of grey and while the bold, bright colours continue to try and bleed their beauty into my soul, for some reason, I can only seem to truly ever feel the world in black or white, all or nothing.

It can be hard for me to form healthy boundaries, hard to care about things just a little, hard to know when to back off. I love passionately, I feel deeply, I rarely hate but I’m well practiced at indifference which some say is worse and I am acutely aware that fear drives many of my decisions. Fear of judgment, fear of disappointing or hurting someone and the underlying fear of being wrong no matter what anyway.

When the emotional sledgehammer comes down I want to pick death over consequence every time. I don’t know if it’s a need to escape pain, feel freedom from responsibilities, an attempt to gain some control by running away before my true nature can be discovered and I am hated by those who I cared for or at this point perhaps it’s simply become a bad habit.

Whatever the root cause, if someone hurts me or worse I hurt someone, capital punishment for my real or imagined crime immediately feels like the only possible solution.

The other day in one of these unjustified fits of internal devastation, I wanted so badly to jump from a 32 story building – all because of a silent argument, no ill words were even spoken, simply a vibe I guess, body language I picked up on, just enough ‘signs’ to form the cracks in my fragile heart that allow that little voice space to squeeze through and spit it’s vile opinions.

“You know he hates you right? Deep down he regrets ever being with you. You are holding him back, he resents you, you have just been guilting him in to staying with you and he certainly deserves better than your ugly fat ass”

I reviewed the half lit sobbing mess looking back at me from the mirror. I am disgusting; I am a worthless, hopeless broken child masquerading in a grown women’s body.

I peer gingerly from the window of my hotel room and look down at the lights of the city and the ground so far below. As I envisage a way out of this painful existence, the voice in my mind takes on an authoritative almost excited tone.

“You’re always going to be like this you know, you can’t just want to die every time he is upset with you, you’re a fucking sook, he can’t live his life walking on eggshells because you are too sensitive. That’s bullshit, that’s emotional blackmail and people like you deserve to die, do everyone a favour…fucking jump bitch!”

It was true, he doesn’t deserve to be stuck with this mess, nobody does. 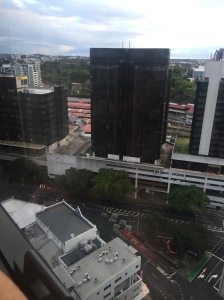 I glance through the moon lit room back towards the bed at the snoring silhouette of my husband and put my hand on the metal window winder and start turning, quietly, one rotation at a time as not to let the oil starved mechanism wake him. Suddenly it stopped, the windows didn’t open far, certainly not far enough for my ever expanding frame to slip through. Heavy tears rolled down my cheeks and I crumpled to the floor pressing my face into the cold window glass and desperately searching the world below me for an answer to end this tragic woman I had somehow become.

Train station, buses, drunken party goers stumbling around the streets looking to keep the night going. Hell even eating something from that dodgy looking kebab shack, the city was full of potential solutions to my problem but I was stuck 18 floors up in my pyjamas, too exhausted by the weight of living to sneak out of the room to the streets below.

The pressure in my forehead from trying to ugly cry silently was almost as intense as the waterfall of snot streaming from my nose and defeated I fumbled my way back into the bed trying not to wake my husband. As I buried my face into the pillow he rolled over and threw one arm around me “mmm I love you so much” he muttered, still sleeping.

Turned out he wasn’t even angry at all, I’d somehow imagined the whole scenario, concocted yet another series of lies based on what? A funny look, a ‘vibe’? I can’t trust my feelings, it’s as though even when void of an episode of mania or depression I’m constantly being gas lit by a part of my own brain that clearly wants me dead and it’s absolutely exhausting.

Along with the bipolar and food issues when I was in hospital I was once also diagnosed with “Borderline Personality Disorder” by a doctor that frightened me, a doctor I hated. This was a diagnosis I fought hard internally to deny, because – well I can’t give a good reason ‘why’ because when it comes down to it I suppose it was purely related to stigma. I knew very little about BPD, I knew that a lot of people thought people with Borderline were mean, attention seeking, emotional black mailers and the thought of being viewed that way absolutely destroyed me. I also believed there was no treatment, so if he was right, I was a lost cause.

At the time, I had been hospitalised for an episode of bipolar mixed mania inclusive of a suicide attempt and I managed to convince myself that the doctor had only suggested BPD because in my manic delusional state I had gotten really angry about something I no longer remember and yelled at him rather abusivly (which was something I had never done before or since to anybody let alone a doctor).

Since then I have learned a lot more about BPD, it’s a bloody hard thing to live with but it doesn’t mean your ‘personality is flawed’ and there are a lot of overlaps with bipolar (mood stuff, impulsivity, suicidal ideation) and even my ED (which has always been a trigger for self harm), many of the other symptoms of BPD do in fact fit me too, the dissociation issues, extreme sensitivity. My current psychiatrist has known me for 3 years now, she says I don’t meet enough of the criteria to also be diagnosed with BPD although I do have a number of “traits”.

Honestly, I was relieved when she said that, it felt freeing, like the shackles of stigma from a misunderstood ‘disorder’ had been officially released from my bruised wrists and yet unfortunately the symptoms I had long feared were caused by BPD didn’t magically melt away when the diagnosis did.

Mental illness, whatever the label, is the ultimate challenge, a constant fight against an opponent who knows all of your weaknesses, it can hurt so unexpectedly and so badly sometimes, it hurts like burns from fire and ice, but sometimes it opens your mind to endless possibilities, friendships and love.

Black and white, all or nothing, catastrophic ecstasy.

-Living a positive life without apology-