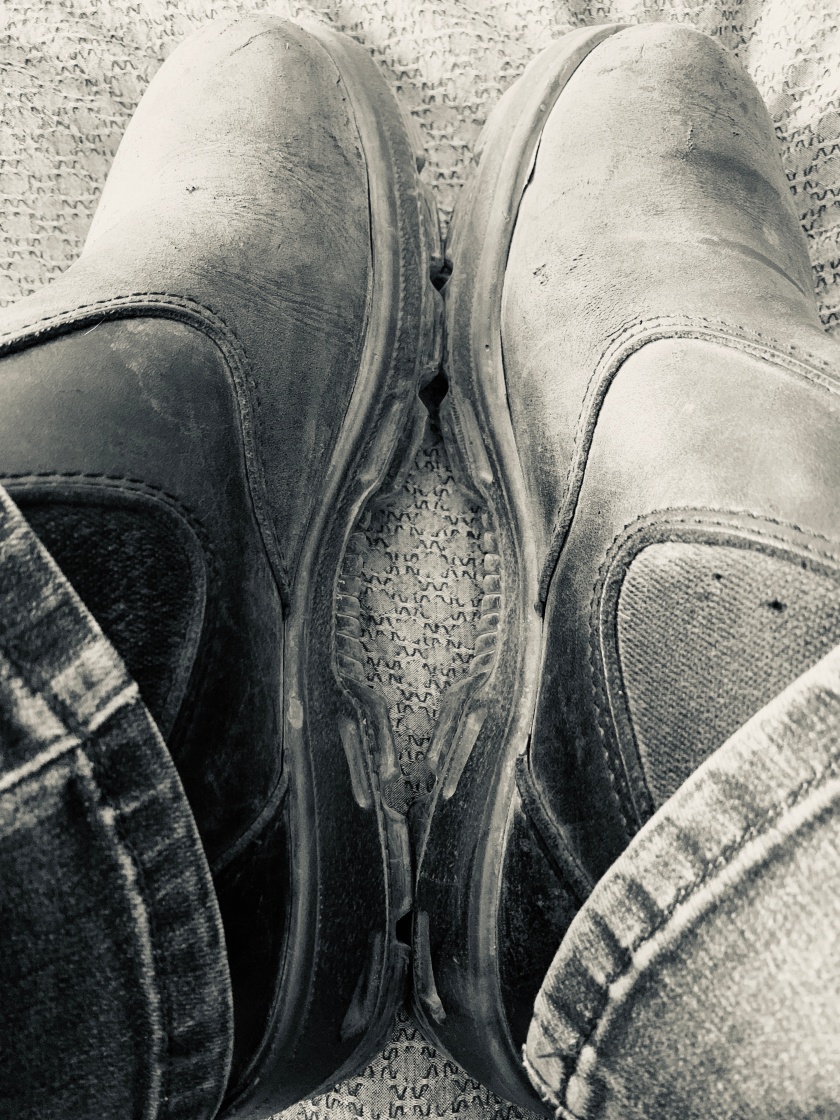 The sound of footsteps makes me catch my breath and hold it a moment, my body stiffens, my neck tenses to the side and my skin prickles.

I have a need to run, to hide what I’m doing, to hide myself, to become invisible.

I fight the intense urge to slam my lap top shut as the footsteps draw closer, I successfully argue in my head for a split second that running or slamming the computer screen down would only draw attention towards us and I frantically click the little ‘x’ at the top of the screen instead; The page takes an eternity to disappear.

That awful pins and needles sensation I get in my left temple hits like a lightening bolt and runs down into my shoulder, my heartbeat quickens as my peripheral vision fades. I take stock a moment and try to draw a breath in as silently as possible, nothing is happening, nothing bad is happening; it was just someone walking past to get another coffee, as people in cafes do.

I swallow hard and quickly glance around me, for now disaster has been averted, nobody found me, nobody even noticed me, the regular din of the coffee shop unchanged by my internal implosion.

My panic was unnecessary, I don’t even have to leave, I can still be here, be a chameleon in the wild for a while longer.

A wave of full body shivers that often runs through my soul when someone inside is upset or trying to get a point across starts building, I ignore the now escalating shivers and re open my word document, cursing the computer for being so slow, cursing myself for being so quick to close it and praying I didn’t lose anything important that I was working on. As a vague afterthought I say inside “it’s okay, for Gods sake knock it off, we’re safe” the shivering lessens but doesn’t quite stop.

Footsteps so often cause this reaction, but only the footsteps of Men, in public, at home, even the footsteps of The Husband. I guess they sound so different to the footsteps of women and children, heavier, more intense, more purposeful, threatening somehow and at some point our brain learned how to single them out.

Now our teenage boys have big manly feet and even they have started make us jump in our own house as they walk down the hallway.

I hate that we react that way.

This day, at the cafe, I wasn’t doing anything illegal, immoral or socially frowned upon. There was nothing unsavoury on my screen, simply some notes I was writing about some work things at the time.

But it happens at home too, when I’m writing or taking notes on lectures I have listened to, the sound of door opening, footsteps coming down the hall and I am overpowered by the fear of being ‘caught’ reading/ writing/ thinking about anything that could ‘expose’ Us, or Our fears/ feelings/ thoughts in any way whatsoever is internally ‘forbidden’. I like to close doors behind me, footsteps give me adrenaline to fight or flee, a hand on the door know gives me a moment to prepare, to hide.

Unnecessary secrets fill my life because it feels like most things I do, particularly those that are for only my own benefit, are considered ‘wrong’ and ‘shameful’ often without reasonable explanation. It’s as though I do not yet have permission to exist and therefore everything that I think feel and believe is supposed to be a secret, I am a secret.

This has happened for as long as I remember, this full body reaction to people with heavy footsteps coming closer, passing by, particularly when I am deep in my own thoughts or reading or trying to sleep.

The all encompassing shame of taking up space in the world, the fear of being noticed, of getting into trouble, the fear of being punished for existing coupled with an underlying embarrassing but undeniable, yearning for affection and validation.

It’s like an innate primal paranoia you spend your waking hours trying to suppress suddenly takes over and catastrophises someone simply walking by into the humiliating prospect that they might not only hurt you in some terrible way, but worse, somehow read your thoughts, see your hopes & dreams and then laugh at what you thought you could have been as they destroy them too.

The house creaks, I jump.

Just be quiet, just be still, make yourself small and invisible, close your eyes tight and pretend they aren’t here, until they go away.

But nobody’s here, the house is empty, just the wind and birds chirping outside, we’re safe now.

Growing, Learning, and Loving After Loss